From Antarctica, Gonçalo Vieira, PROPOLAR coordinator, writes about the need to use Earth Observation technologies to monitor the planet's icecaps. Why do the transformations that the cryosphere undergoes, due to changes in atmospheric temperature, generate enormous impacts on environmental dynamics at a global level?

The cryosphere – that is, the part of the planet that is frozen – is one of the most sensitive spheres of the Earth System, and it is undergoing rapid changes that generate global impacts. The cryosphere includes the Antarctic and Greenland ice sheets (inlandsis), glaciers, ice shelves, sea ice, frozen lakes and rivers, snow, permafrost and seasonal frozen ground. The cryosphere is mainly present in the polar regions, characterising the environmental dynamics. Still, it is also relevant in high mountains from medium latitudes to the tropics, where it plays a key role for hydrology and human societies. Moreover, ice is extremely sensitive to small changes in atmospheric temperature, and its transformations have an enormous impact on the global climate system, with implications even in regions of the globe where natural ice does not occur.

Because the cryosphere has always proved hostile to human life, it remains a remote and almost abstract concept for most of the planet’s human population. In addition to the vastness of the cryosphere, the long distance that separates us from it, and the extreme weather conditions that characterise it, we recall that night dominates for several months of the year in polar regions. Such factors strongly condition our capacities for observation, so monitoring the cryosphere poses enormous technical challenges. These can only be overcome by way of an internationally coordinated scientific effort and the support of new Earth Observation technologies. Satellite data are on the front line, like that gathered by Sentinel-1 (Radar) and Sentinel-2 (multispectral), the satellites of the Copernicus network operated by the European Space Agency, under the Copernicus Programme funded by the European Comission.

Today, these open-access data platforms are widely used for monitoring different cryospheric variables, both for scientific purposes and for applications. However, the analytical capacity is far below the available data, so promotion of better data use is urgent – especially in our present scenario of climate emergency. 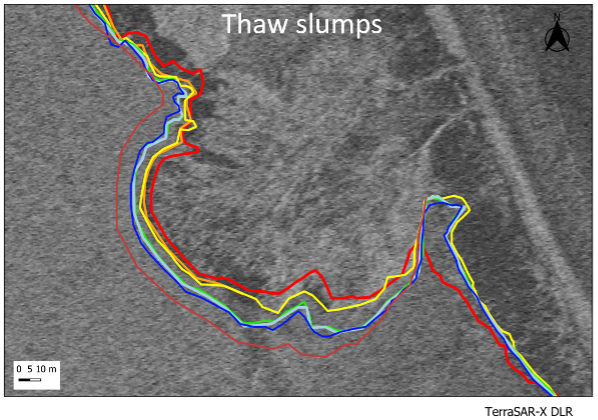 Monitoring a retrogressive landslide scar in the Canadian Arctic using images from the TerraSAR-X (DLR) microwave satellite, which allows observation even in cloudy sky conditions. © DR

Ever-easier access to Earth Observation technologies has revolutionised the natural sciences, whether due to the accessibility of images or the increasing availability of online platforms that allow for image analysis. The natural sciences thus have an increasingly global reach. It is now possible to conduct studies and develop advanced techniques and competitive services linked to the cryosphere, even if we are geographically far from the poles. And it’s possible to do this at a very low cost to the user.

The Centre for Geographical Studies (CEG) of the Institute of Geography and Spatial Planning, University of Lisbon, is among the national institutions that have invested most in studying the polar cryosphere. With two decades of experience in Antarctica and a decade in the Arctic, CEG has been at the forefront of monitoring the thermal state of the Antarctic permafrost. Its expertise with in situ observation is coupled with the application of remote sensing techniques, using multispectral and microwave satellites and unmanned aerial vehicles to understand changes in the Arctic and Antarctic permafrost environments. Examples of this are the ongoing work under the H2020 Nunataryuk, EO4PAC (ESA), THAWPOND and PERMAMERC (FCT) projects carried out in the Canadian Arctic, or the PERMANTAR (PROPOLAR/FCT) project in the Antarctic. Permafrost is one of the most critical cryospheric variables in the global climate system, particularly its impacts on the carbon cycle and its consequences for methane and carbon dioxide emissions. Therefore, it is a key element in the European Arctic Policy presented in Brussels last October. 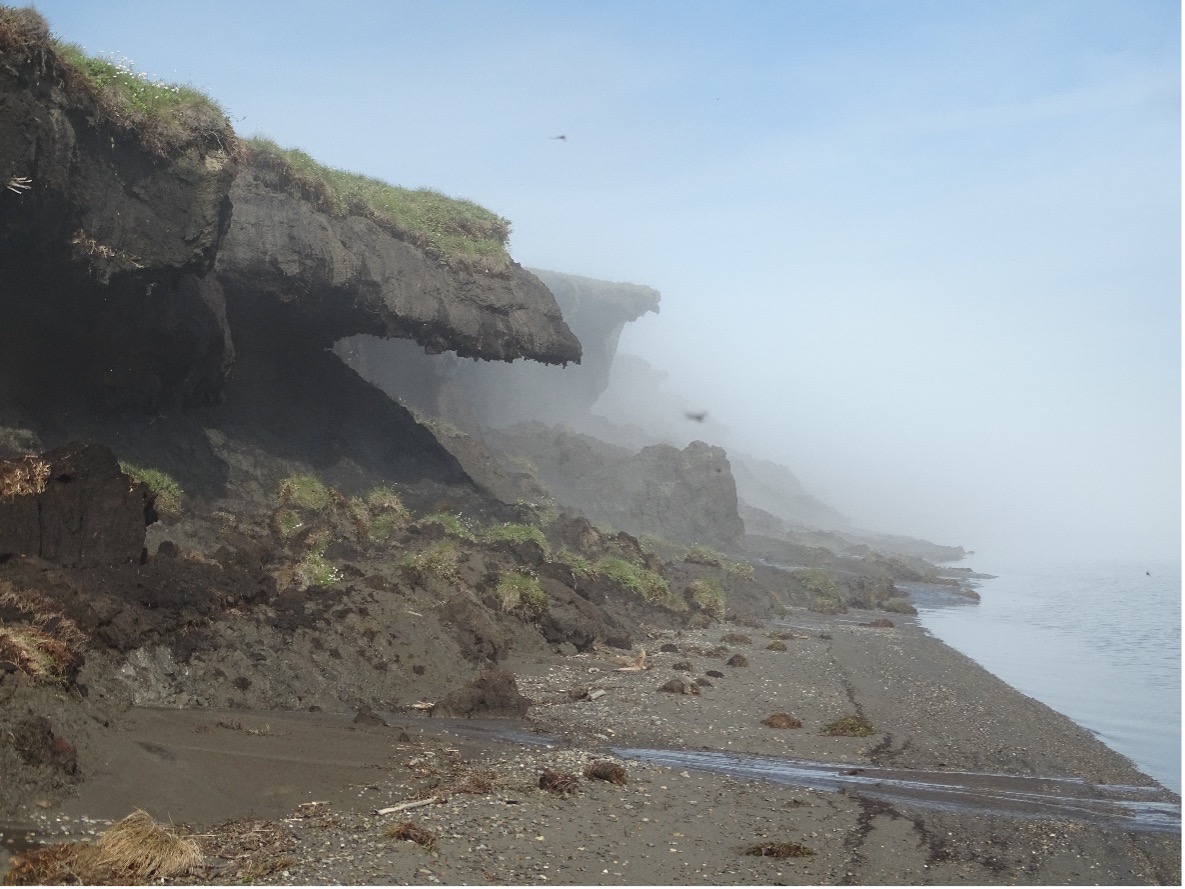 Cliff carved out of permafrost in the Canadian Arctic, where annual erosion of several metres leads to the transfer of organic matter from the permafrost to the atmosphere and ocean. © DR

The case of CEG/IGOT is an example of how national institutions can benefit from Earth observation infrastructures and data to consolidate their science or to promote the creation of new services. Portugal has a solid polar research programme, the Portuguese Polar Programme (PROPOLAR), which has been promoting access to the polar regions for scientific or technological development projects for over a decade. In addition to opening annual calls for new projects, PROPOLAR provides scientific and technical advice, in close collaboration with the FCT Polar Programme, aiming to consolidate national scientific activity in the Arctic and Antarctic.

However, Portugal has not yet taken full advantage of the potential of Earth observation technologies in the area of the cryosphere, and there are broad areas of knowledge to which national institutions can make a strong contribution. These fields will certainly be the focus of international calls for proposals, particularly under the European Commission’s Horizon Europe programme. In this context, it is vital to keep an eye on what is happening in the framework of the EU Polar Cluster, and the new online platforms soon to be launched by the European Polar Board and EU-PolarNet, as well as the priorities identified in the Integrated European Polar Research Programme presented in 2020.

Gonçalo Vieira is an Associate Professor at the Institute of Geography and Spatial Planning (IGOT), University of Lisbon. He is also Director of the College of Polar Sciences and Extreme Environments of the University of Lisbon and the Portuguese Polar Programme coordinator. His research focuses on the effects of climate change on permafrost environments, particularly geomorphological dynamics and ecosystems, with his scientific activity focused on permafrost monitoring and applications of high-resolution remote sensing techniques. He has participated in and led several research projects in Antarctica, Svalbard, Hudson Bay, Yukon Coast and Mackenzie Delta, Patagonian Andes, High and Middle Atlas Mountains and Portuguese mountains