The company based in Ílhavo was started in 2011, on board a technological revolution that made 3D printing accessible to the general public. A few years later, BEEVERYCREATIVE was already participating in ESA missions. Today, space is one of the many fields where this company operates.

Aurora Batista left this year’s edition of the European Rocketry Challenge (EuRoC) with an overwhelming sense of mission accomplishment. Not even the president of BEEVERYCREATIVE expected the 3D printers she decided to take to the paddock in Ponte de Sor would receive so many requests from several of the competing teams present. The printers “worked several times through the night” in response to the students’ last-minute needs, and proved essential to the launch of some of the rockets in competition, Aurora Batista told us at the close of EuRoc 2022.

Printing a three-dimensional object was not always this easy or at least this accessible — particularly for thrifty students. Until very recently, to embark on an adventure in the universe of additive manufacturing (the technical jargon naming even the simplest 3D print) would imply “extremely high costs” which were “only feasible for big companies”. It was only in 2011 that the “first steps toward making this technology accessible to a wider public” were taken through a revolutionary open-source movement that started with the introduction of the first low-cost 3D printer in the market, RepRap. This machine allowed self-replicating, meaning, one could print pieces that would build another like it.

This revolution was at the origins of BEEVERYCREATIVE, born that very year in the halls of the University of Aveiro, begat by the enthusiasm of Francisco Mendes and Jorge Pinto. Initially called bitBOX, the company was launched with the production of “the first 32-bit controller, at the time the fastest in the market, which was sold to a maker community, anxious to create their own 3D printers”.

The “positive reviews” and “success in sales” confirmed it was a solid bet – so much so that Francisco and Jorge decided to “take a risk and proceed with the development of the first Portuguese commercial 3D printer”, the BEETHEFIRST. The first model brought notoriety. “The building quality, ease of use and the fact it was the first portable 3D printer all contributed to its recognition via several national and international awards”, Aurora Batista recalls.

The achieved notoriety launched BEEVERYCREATIVE into its first adventures in space. In 2014, the company was part of an international consortium that participated in the project MELT (Manufacturing of Experimental Layer Technology) developed by the European Space Agency (ESA). The first European 3D printer entirely designed for microgravity environments was thus created, “capable of printing high-performance polymers that can substitute some metals, such as aluminium”.

“The printer was made to withstand the 9G force achieved during the launch into space and to be operated from Earth so that the astronauts’ only concerns are that the printer has filament and to retrieve the manufactured object”, explains BEEVERYCREATIVE’s CEO. The same printer was recently in the Negev desert, in Israel, where an analogous mission replicating the environment on Mars was led by the Portuguese João Lousada. 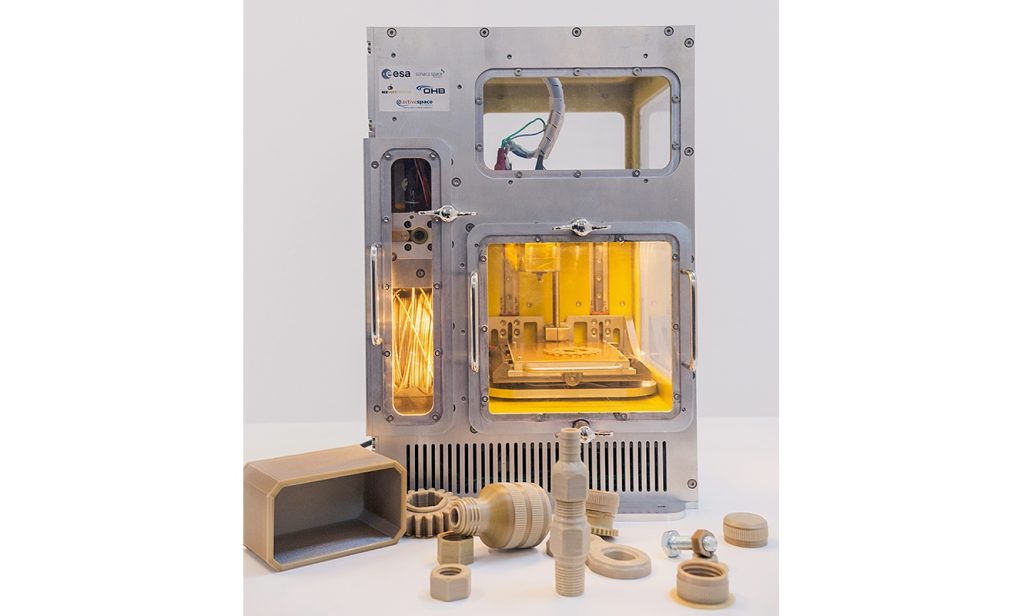 The company has already participated in several ESA projects and missions, like MELT. ©BEEVERYCREATIVE

The IMPERIAL project followed, which aimed “to develop a 3D printer designed to allow out-of-Earth manufacturing, capable of operating in microgravity and printing high-performance pieces in a polymer of unlimited dimensions along a single direction.” The solution was developed based on the available resources aboard the International Space Station, and the printer built to be compatible with the rack in the Columbus module”, the company CEO explains.

BEEVERYCREATIVE might also reach the Moon: upon an invitation by ESA, it was involved in the URBAN project. The mission consisted in defining the steps needed to be taken by ESA to create a habitat on the surface of our natural satellite. The company then also participated in the development of PODIUM, with which ESA tried to “create a printer capable of printing high-performance polymer in a high vacuum”, but also to “recycle the printed pieces, creating filament and using it to print in those same conditions”. “The goal is to guarantee that in future space missions it’s possible to reuse printed objects, thus creating a truly circular economy”, Aurora Batista adds.

Additive manufacture “joins several very distinct technologies with a shared goal: producing three-dimensional objects layer by layer from a 3D model”. Currently used “in the manufacture of unique and personalised pieces, objects with complex geometries and small series production”, it has reached a variety of industries and fields besides space, gaining relevance in the automotive industry, medicine, and in biotechnology. The company’s most recent project serves as an example: the new BIOPRINTER 2.0 is “capable of printing live cells” and was developed for 3B’s Institute at the University of Minho”

In addition, BEEVERYCREATIVE is working on “different projects in the context of circular economy which involve, for example, the reuse and valorization of waste resulting from the leather industries (LEATHER3D) or from metals (ADD.POWdER), co-funded by FEDER through PT2020 and CENTRO2020.

It’s easy to understand the company’s success. Besides “the constant cost reduction and the user-friendliness of our equipment”, 3D printing also allows “the production of pieces without the usual waste created by traditional industries, a reduction in fuel consumption through the manufacture of lighter and aerodynamic pieces, and the use of recycled polymer to print new objects”. In this way, “it plays a significant role in sustainability”, Aurora Batista points out.

In space, this is truly essential: “The capacity to print structures and spare pieces in situ will reduce costs and load constraints which are an obstacle to the launching and storage of all the necessary material for long duration or long-distance missions from Earth. To enable astronauts to print large pieces in 3D will be vital to the self-sufficiency of future space missions.”

At EuRoc, it wasn’t necessary to see the rockets in orbit for 3D printing to reveal itself essential for many of the participating teams. “I was told several times: ‘Your help was crucial to our launch!”, Aurora Batista recalls. There, 3D printing propelled dreams further – and, perhaps, it was the beginning of a self-replicating relationship.