The new satellite Sentinel-6 Michael Freilich will be a decisive factor in the decision-making process about adaptive measures to confront the consequences of climate change, helping to protect the more than 600 million people who live in vulnerable coastal areas around the world.

The Copernicus Sentinel-6 satellite, which will measure sea-level rise and ice thickness, seen in the cleanroom at IABG’s facilities in Ottobrunn (Germany), before it was sent for launch in late 2020 from the Vandenberg Air Force Base, California (USA).

Radar altimeters provide information about different characteristics of the oceans’ surface, and this information can be used to understand particular phenomena and processes taking place much deeper down: the surface and the depths are connected. In recent years satellite altimetry, which allows a 4D estimation of the status of the ocean, has been proving its capacity to make valuable contributions to the development of knowledge about the oceans.

After the 1992 launch of the TOPEX/Poseidon (T/P) mission, perhaps the most famous satellite altimetry mission to date, several other satellites were launched with a radar altimeter on board. The main objectives of this joint mission between NASA and CNES were essentially to study ocean topography, ocean variability and sea level on a global scale. The missions Jason-1 (2002-2013), Jason-2 (2008-2019), and Jason-3 (2016-present) followed, and had many characteristics in common with the T/P mission (1992-2005). Given their period of repetition (-10 days) and the unparalleled accuracy of their measurements, this series of high-altitude missions is considered the benchmark for the study of sea level variations. The extension of these studies until 2030 is now possible with the successor mission Sentinel-6, which is part of the Copernicus European Earth Observation program and the result of a joint effort between EUMETSAT, the EC, ESA, NASA and NOAA. After Sentinel-6, the launch of Sentinel-6B is scheduled for 2025, and these two satellites will allow the completion of four decades of data fundamental for the study of terrestrial climatology.

The Sentinel-6 altimetry mission will begin on November 21 with the launch of the Michael Freilich satellite, allowing the continuation of three decades of observation of sea levels. 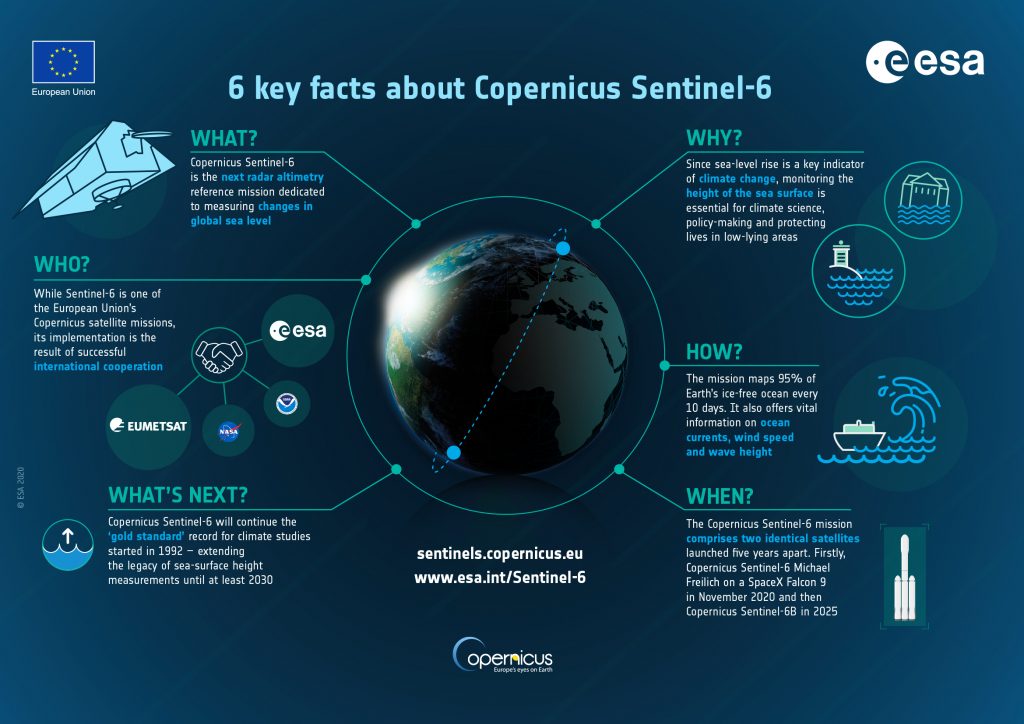 The information gathered by the altimetry missions over the decades, these altimetry missions have gathered information that has allowed more detailed observations of the characteristics and variations of the surface currents of the oceans, the ocean wave field, variations of the average sea level, the shape of the Earth (geoid) and the gravimetric anomalies of the land surface, wind intensity near the surface of the sea, tides, and cartography of the polar caps and the sea floor. It has also contributed to the development of numerical models of ocean circulation.

Because the ocean’s circulation is directly related to the redistribution of energy in the climate system, and therefore related to any changes in the climate, the observations of satellite altimetry are critical for understanding the climate and predicting its variability. Satellite altimetry allows more accurate prediction, analysis and monitoring of phenomena responsible for significant alterations in the climate at a global and regional scale, which have clear expressions at sea level: for example, the El Niño Southern Oscillation brought heavy rains, extreme drought and, consequently, catastrophic fires. Equally important is the prediction of the trajectory of extreme weather events such as hurricanes, allowing the mitigation of their consequences when they reach islands and coastal areas. This information is of utmost relevance not only to the scientific community, therefore, but also to society in general.

In addition to enabling the studies above, the Sentinel-6 mission will provide near-real-time information for maritime and meteorological applications, and is also crucial for operational oceanography. Beyond ensuring the legacy of the benchmark missions and the continuity of the Jason-3 mission (still operational), the Sentinel-6 mission will bring state-of-the-art instruments onboard to collect more accurate data with a higher degree of spatial resolution. It is expected to cover the areas closest to the coast, as well as bodies of water in the continental interiors (rivers and lakes).

The mission will acquire data for the study of the climate that is necessary for making decisions about how to cope with the consequences of climate change, thereby helping to protect the approximately 600 million people living in vulnerable coastal areas. Similar to the other Copernicus missions, such as the Sentinel-3 mission (already operational under the auspices of ESA and EUMETSAT), the Sentinel-6 mission’s data will be accessible free of charge, and will cover about 95 percent of the ocean.

Clara Lázaro is an assistant professor at Faculty of Sciences, University of Porto (FCUP). She holds a PhD in Surveying Engineering from FCUP, and she has expert-level knowledge on Satellite Altimetry applied to Oceanography. Currently, her research focuses on studying the sea level variation using Satellite Altimetry and on the development of methodologies for the computation of an improved wet troposphere correction for Coastal Altimetry. Clara has been involved in many national and international research projects.