Artemis I: Back to the Moon… to stay

If you ask anyone in the world who is the most known astronaut of all times, they will likely say either Neil Armstrong or Yuri Gagarin. But the feats they accomplished, deeply graved in our history and our collective minds, happened more than half a century ago, at a time when cell phones had not even been discovered. Since then, only 12 people have walked on the Moon surface, all men, all US citizens, and this was 50 years ago.

What happened since then? We explored the solar system and beyond, we landed with proves and rovers on Venus, Mars and other celestial bodies, we constructed space stations, we developed satellite communications, GNSS and used satellites to gather scientific evidence and grow consciousness that we have to protect our fragile planet… but humans never again ventured deeper than a few hundreds of kilometres away from Earth.

Nonetheless, this is about to change. Technology is rapidly advancing, space is no longer driven by a race between the US and the URSS governments, there are many more regions that want to explore and benefit from it such as China, Europe, the UAE, or Japan amongst many others, and private companies want to do it too, and have the technical and financial means to do so!

But what is the next big goal in human space exploration? Some countries want to land or set foot on the Moon for the first time, others want to put the first woman on the Moon, but something has changed; instead of going to the Moon on a very short mission to do science and “plant a flag”, this time we want to go there, learn more about it, explore it and utilize its resources, this time we want to go there and stay, this is the difference. And all this with the horizon vision of somewhere in the future sending humans to Mars. This is what the Artemis Programme is all about.

The name Artemis comes from the Greek goddess of the Moon and twin sister of Apollo which gives a clue on the ambition of the programme. Artemis will consist of a series of increasingly complex missions with the goal to put humans on and around the Moon, and in the future establish a semi-permanent base there for us to deepen our knowledge of the universe, serve as a test bench for new technologies but also of improve our understanding of the behaviour of the human body in deep space environment, all building blocks that are fundamental if we ever want to safely send humans to Mars.

Artemis will rely both on the Space Launch System (SLS) rocket and the Orion spacecraft (including the European Service Module – ESM) as well as on other commercial and institutional launchers and landers and on the Lunar Gateway, the space station that is being developed in international collaboration and that will orbit the Moon in a Near-Rectilinear Halo Orbit.

The tentative timeline for the first 5 flights is the following one.

These missions will be complemented by other missions launched by commercial providers such as SpaceX launching the initial elements of the Lunar Gateway (PPE+HALO) in 2024 or the same company testing the Human Landing System (HLS) the same year as well as other missions related to telecommunications or navigation.

However, there is a major difference between Artemis and the Apollo programmes. While the former was an exclusively US initiative, Artemis is a US led international endeavour where many countries contribute to and benefit from. Concerning Europe, the contribution to the Artemis Programme is very significant where ESA is contributing with the European Service Modules for all Orion flights, with the I-HAB and ESPRIT for the Lunar Gateway as well as potentially with Lunar Communications and Navigations, the European Large Logistic Lander (EL3) and other elements. In exchange Europe will be able to carry out research in the Lunar Gateway and eventually land Europeans in the moon somewhere in the future. Ultimately, Portugal also contributes to different Artemis elements, and concerning Artemis I, Active Space Technologies contributed to the Orion MPCV with Structural Thermal Models (STM) for the battery packs and Amorim Cork Composites provided cork as thermal insulation for the SLS.

As per Artemis I, the mission will launch from pad 39B at Kennedy Space Centre, and it will be the first integrated flight test of NASA’s Orion spacecraft and the Space Launch System (SLS) rocket. The mission will put the Orion capsule in Distant Retrograde Orbit (DRO) around the Moon (a specific stable orbit only achieved by the Chang’e 5 Chinese spacecraft) and will also deploy a series of cubesats from international partners. 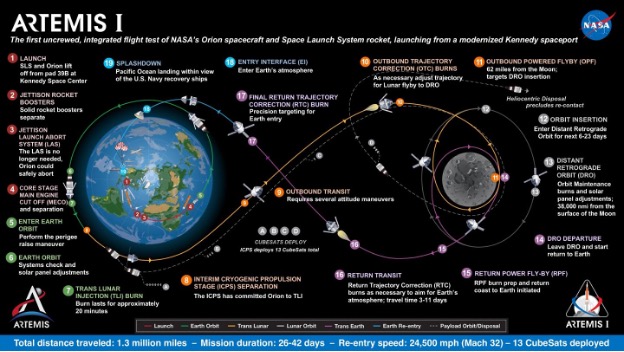 Finally, it is worth noting that the Artemis Programme is not the only initiative to send missions to the Moon, other countries such as Russia, China, Korea, Japan, Israel, and many others also have plans to reach our closest celestial body in the coming years. Just an example, only a few days ago Korea sent the Korea Pathfinder Lunar Orbiter, the first mission of the country to the Moon.

In summary, we went to the Moon 50 years ago, and barely went back there since then. Nevertheless, future looks bright for Lunar Exploration and the next decade will probably be the decade where many countries visit and explore our natural satellite, when humans land there again, when we construct a space station around it and a base on its surface. In short, the next decade will certainly be the decade of the Moon!

Joan Alabart is a Spanish MSc Civil Engineering from Universitat Politécnica de Catalunya who spent one year at TU Delft in an exchange program. He has over five years of experience in project engineering and project management in large international engineering projects (rail, road, maritime) combined with a life-long passion for space. This enthusiasm for the ultimate frontier together with his attachment to Portugal has brought him to Lisbon where he currently works as the Industrial Relations and Projects Officer at the Portuguese Space Agency with the focus on non-space applications. When not talking about the wonders that space brings to us, you might find him riding a flashy orange bike along the Tejo.