Carl Sagan used to say that astronomy was fundamental to explain the place of the human being in the universe. Rosa Doran uses it to innovate in the way she teaches and to delight teachers.

“What I want most in the world is for schools to have no walls and for teachers to stop teaching.” Rosa Doran is not afraid of words or the controversy they may cause. The only thing that the coordinator of NUCLIO – Núcleo Interactivo de Astronomia e Inovação em Educação fears is not having a voice or influence that allows her to pass on the message: “Destroy the school, fill the classrooms with puffs and skateboards, with spaces where students can collaborate and transform teachers into what they are: teachers are not walking text books, teachers are facilitators of learning, walking companions, but this the school doesn’t do and I don’t know why.”

These were not the words that caught the attention of the International Astronomical Union (IAU) and that made Rosa Doran the winner of the first edition of the Astronomy Education Award, launched by this body, which aims to distinguish people or organizations that have contributed significantly to astronomy education. In a statement, the IAU speaks of a “fabulous influencer” and a “global leader” whose goal” is to change the world through astronomy education”.

“The ODE Education 2022 award has been given to Rosa Doran for her powerful inclusive, innovative, inspiring, comprehensive and transformative achievements in astronomy education,” the IAU writes in the same statement. A distinction that rewards three decades of organizing, securing funding and leading “numerous small and large-scale projects in developed and developing countries that have reached thousands of teachers and students around the world”.

On the bookshelf behind Rosa Doran as this conversation takes place, a globe and Carl Sagan’s book “Cosmos” feature prominently. The American scientist has, in fact, always a place in the speech of the educator, who uses an episode of the television series Pale Blue Dot to explain the importance of astronomy as a central discipline of innovation and education, which is the central work of NUCLIO .

“Carl Sagan talks about the inability of human beings to contextualize their dimension in the universe and in that sense astronomy is a fundamental discipline for human beings to understand what it is to be human,” Rosa explains. “Astronomy is inter-trans-multidisciplinary, it allows the teaching of all the curricular contents of any subject”, she guarantees.

Rosa, a determined woman with very short, grey hair, came late to teach astronomy, even though this is an old love. “The passion started when I was little. I lost my father when I was six and my mother told me that he had gone to live on a star – which today I know is a planet, Venus – and I used to spend hours looking at the sky, and somehow I thought you could live on a star”, she says in a slow tone, still with a strong Brazilian accent, despite the years spent in Portugal. 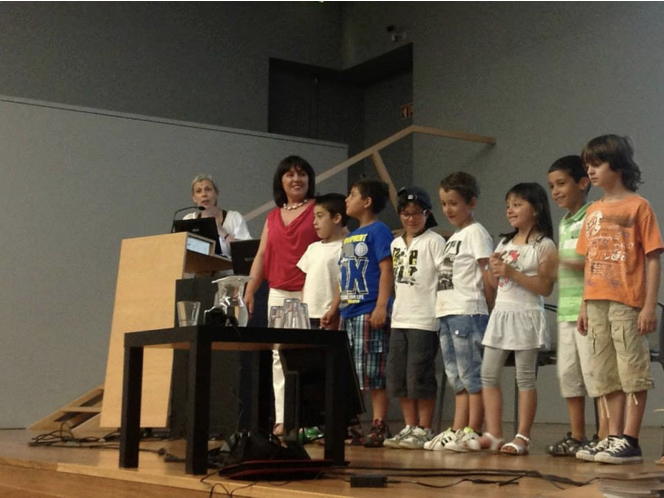 Rosa Doran at a lecture to a class of 200 schoolgirls in Gujarat, India. © DR

A graduate in Physics from the Pontifical Catholic University of São Paulo, he did his Master’s in High Energies and Gravitation at the Faculty of Science of the University of Lisbon, and there he fell in love with Black Holes.

“At that time I didn’t even follow the academic path. Life led me to opt for the world of work, which was a world I didn’t like. I learned a lot, but I really didn’t like it.” For a few years, she worked as a finance manager, held roles in human resources, commercial and marketing.  “While it was challenging, it was very interesting, but then I started to realize it was a world that didn’t mean much to me. The perception of making money just for its own sake, without having a goal, was not my world. The capitalist world was not my world,” he recalls today from his home in Lisbon. Life happening again dictated his path and coming to Portugal gave him the opportunity to get back on track.

“When I arrived in Portugal I decided I didn’t want that world anymore. I had the opportunity to find an open door to do my Masters at the Faculty of Science at the University of Lisbon and the luck to find an extraordinary supervisor, Professor Paulo Crawford, who helped me navigate a part of understanding the universe, black holes. It was an absolute passion.”

Rosa was already doing her Ph.D. when, together with some colleagues, she was asked to do the scientific revision of an Astronomy and Astronautics dictionary. “We realized that there was very little in Portuguese and we created the Astronomer’s Portal, which still exists, not as strongly, but still with plenty of information.” It was also at this time that, during outreach activities around the country, they realized that teachers lacked the training and tools to teach astronomy. “This tour around the country made us realize that what people know about astronomy is very limited and that teachers had no training, so we decided in our spare time to give training to teachers and workshops for schools”. Thus, one of the first NUCLIO activities was born, today called NUCLIO on the Road.

Around the same time, Ana Mourão, professor at the Instituto Superior Técnico, was challenged to launch the European version of the Hands on Universe project. “It was the lifting of a curtain that let you see something different in education,” she says two decades later. “I found a group of people who wanted to adapt to Europe the American model, born at the University of Berkeley in California, which aimed to turn scientific research into something students could work on in the classroom, to get students to discover supernovae, to make light curves of supernovae, to understand how they behaved.”

In 2006, Rosa Doran met Carl Pennypacker, researcher and creator of the Hands on Universe project, and that was the moment she decided what to do “with the rest of [her] life”. “I saw myself in a room in the middle of a group of people, scientists, educators, from over 20 countries, who got together every year somewhere in the world to discuss new ideas for the world of education and I looked at that and said, ‘That’s it’.” 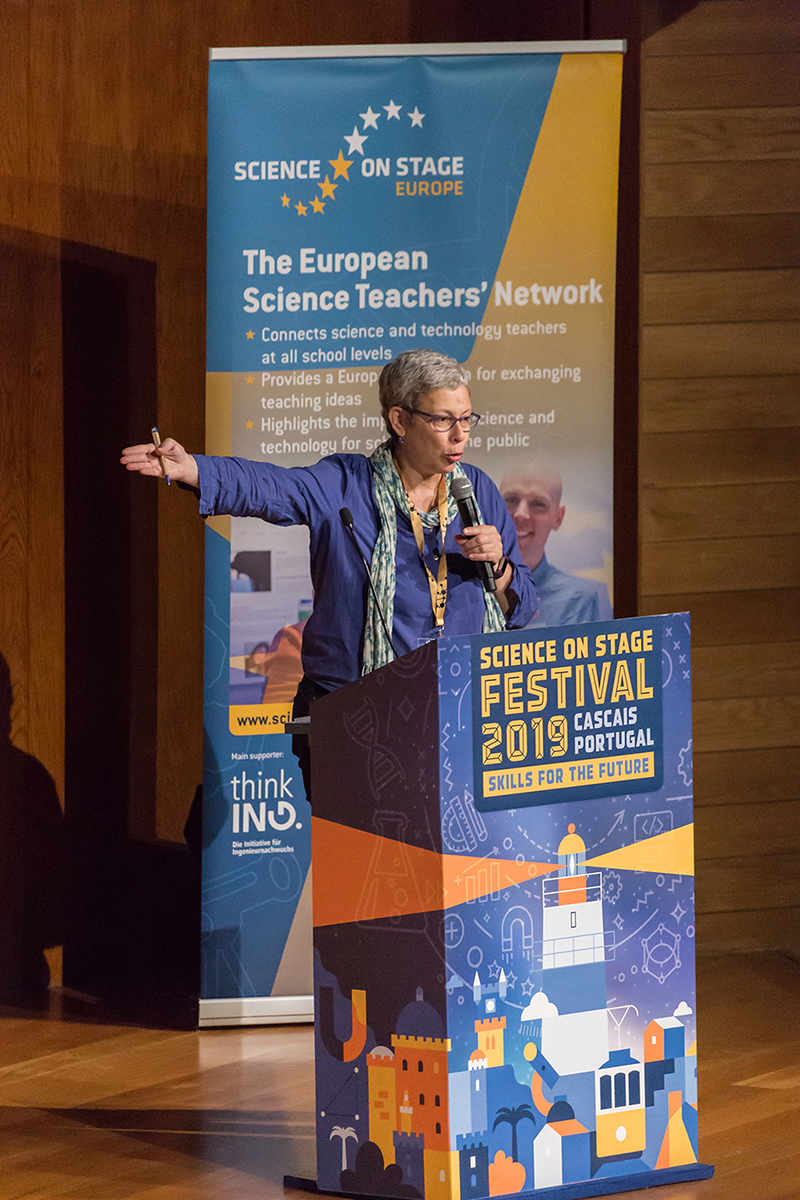 “I don’t think I’ve ever given two presentations that are the same anywhere in the world,” says the NUCLIO coordinator. © DR

At a time when the work plan for the International Year of Astronomy was beginning to be outlined, Rosa proposed integrating teacher training into the planned activities. With the yes of Pedro Russo, global coordinator of the International Year of Astronomy, the Galileo Teacher Training Program was born. Once again, it was intended to bring science training into the classroom . “The idea was to have a group of people all over the world who would train the teachers who wanted to join the GTTP and in a cascade scheme they themselves would train others,” he explains. They quickly reached 100 countries and in 2010 more than 15 thousand teachers had already received training and Rosa was forced to make a decision: either she continued doing scientific research or “plunged head-first into the world of education”. The prize she has now received has confirmed a decision that was more than a decade old: “I thought it was more useful in the teacher training part”.

“People started calling the Galileo Teacher Training Program a movement and saying that I had the power to enthuse teachers to make a difference, to give them the strength to embrace what was difficult and believe that the impossible is possible and I decided to dive in head first.”

The scientific research moved into the classroom and always with a motto: “This is something I’m not just going to do with the privileged students, it’s something I’m going to do with everyone.” He calls it inclusive education and this is the central mantra of his speech. He talks about the need to work on “teaching tailored to the needs and talents of pupils”, he reminds us that children are not all the same and that “industrial education is very good for an assembly line, where all cars should be assembled in the same way”, but that not even that is needed, because “nowadays that is done by robots, we don’t need humans doing that”.

Rosa uses a technique she calls design thinking: “I look at the human being in front of me and try to understand what makes his eyes light up or what makes him cross his arms and move away”, always adapting the speech to the interlocutor. “I don’t think I’ve ever given two presentations that are the same anywhere in the world.”

NUCLIO has today more than two dozen active projects, ranging from informal science learning (Surrounded by Science), to fighting light pollution and defending the night sky (Dark Skies Rangers), to supporting digital education for schools in rural and low population density areas (Learning from the Extremes) or PLOAD (Portuguese Language Office of Astronomy for Development) which promotes the use of astronomy as a tool for development.

NUCLIO’s activities have reached over 70,000 teachers in more than 120 countries over the last 21 years and Rosa Doran is far from wanting to give up: “It doesn’t mean that we work with everyone permanently because that requires funding. It makes me very sad when I realise that most of my time is spent applying for funding and filling out reports and not using my talent which is to delight teachers. Because being a teacher is the most important profession in the world. It is in the classroom that the future of humanity is drawn.  So as long as I can, my power will be theirs …”