Manuel Wilhelm, Space Transportation and Exploration Officer at the Portuguese Space Agency and national delegate to the European Space Agency (ESA, travelled to the European Spaceport to witness the launch of ESA’s new medium-lift Vega-C rocket. This report is based on Manuel Wilhelm’s impressions and descriptions of the launch, before and after.

It’s Wednesday, 13th July, 6 o’clock in the morning, and it’s pouring rain in Kourou. I arrived in French Guiana on Monday evening to bear eye-witness to the launch of the ESA’s new medium-lift Vega-C rocket. This is the rocket that will in the future also carry the Space Rider, Europe’s reusable orbital vehicle, that will land in Santa Maria in the Azores. I am part of the ESA delegation accompanying the launch.

There is a sense of nervous excitement in the air, despite the early hour. Everyone is very chatty, exchanging impressions. It is no wonder: the Vega-C rocket is scheduled to launch today from Europe’s Spaceport, here in Kourou. The new rocket represents a dramatic capability boost compared to its predecessor, Vega, which has flown in the last ten years since 2012. Vega-C features major enhancements, such as increased payload and mission flexibility, benefitting its competitiveness and ensuring European institutional missions access to space for the years to come. 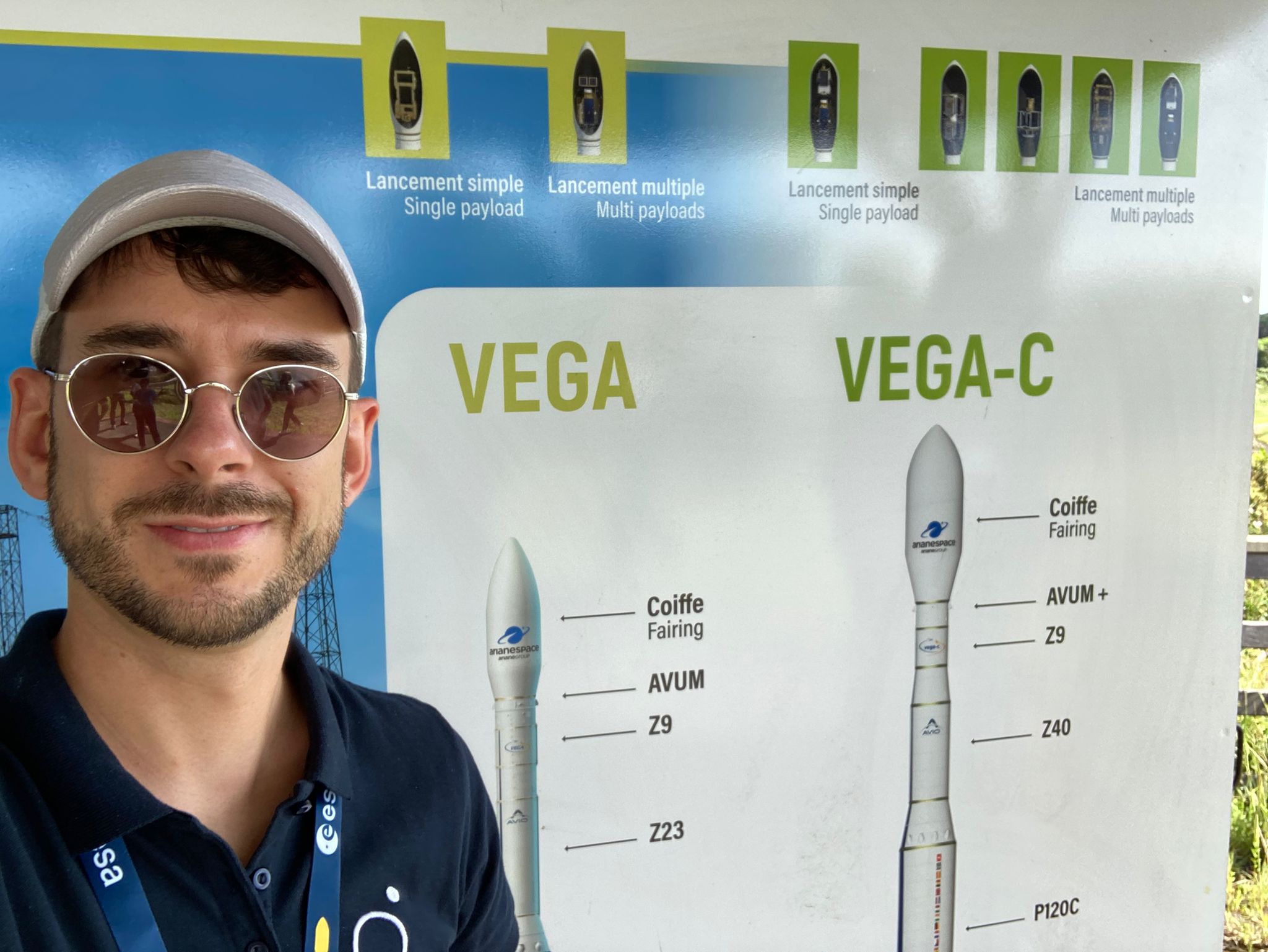 The excitement is not new,  the day before you could feel that people were also nervous. But from what I saw there, everything seemed to be happening according to plan. The launch readiness review went smoothly, which was an excellent sign, leaving people feeling cheerful.

This moment is the culmination of long years of preparation, that everyone expects will pay off once Vega is launched. Still, we are talking about a rocket that relies on three sequentially staged solid boosters: once they get ignited, there is no turning back. The fourth stage is based on liquid fuels and can be reignited several times, thus enabling multiple payloads to be delivered to individual orbits.

One should not forget this is also an inaugural flight, so there is, of course, some tension, and many last minutes procedures needed to be completed in the previous days. There were countless small bits and pieces  to be taken care of, so I guess there wasn’t a lot of sleep for many people during these last days. 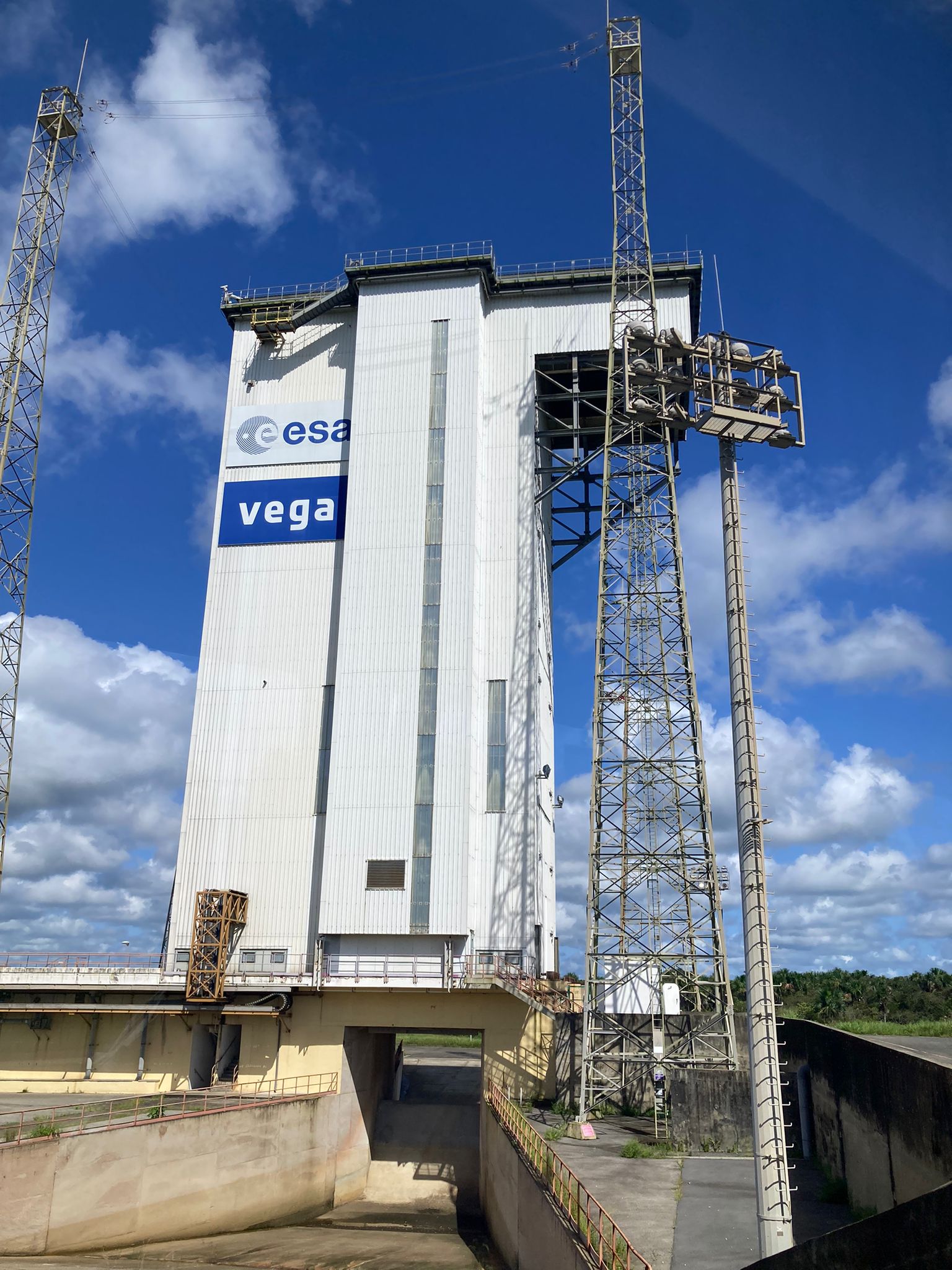 The Vega-C building, inside of which the rocket was integrated and ready for launch. Three hours before liftoff, the whole building would be moved away. © Manuel Wilhelm/ DR

I had the chance to talk to some people from the Vega-C team who have been involved with the launch preparation. Despite the lack of sleep, hey tell me they are confident, and no major issues have occurred during the last days. The team has also benefited from the experience of the previous Vega launches, so this is not a debut for many of them.

It’s 7:00 now, we arrived at the space center, and it is time to go to the Jupiter Room. This is where the Mission Control team is seated, separated by a glass wall from the visitors, the so-called “fish-bowl”. Looking outside at the sky, one can only hope that the clouds will dissipate so everyone can have a clear view of the launch.

Once the first early morning excitement has calmed down,  a sense of deep focus fills the room. Everyone is ensuring the job gets done — especially after the director of Space Transportation at ESA, Daniel Neuenschwander, has addressed the audience. You can now only hear hushed conversations and the anticipation is tangible. No more walking around: the Mission Control is in full concentration.

Vega-C will have a launch window of two hours, which means that during this time, the launch can happen. The pre-launch sequence is started, with the final four minutes counting down. With 2 minutes to go, the doors on the side of the control room open for people to go outside to see the rocket from the spectator deck. We go outside, but we are informed via intercom that  some status has turned from green to red. And red is, as we know, a sign of trouble. 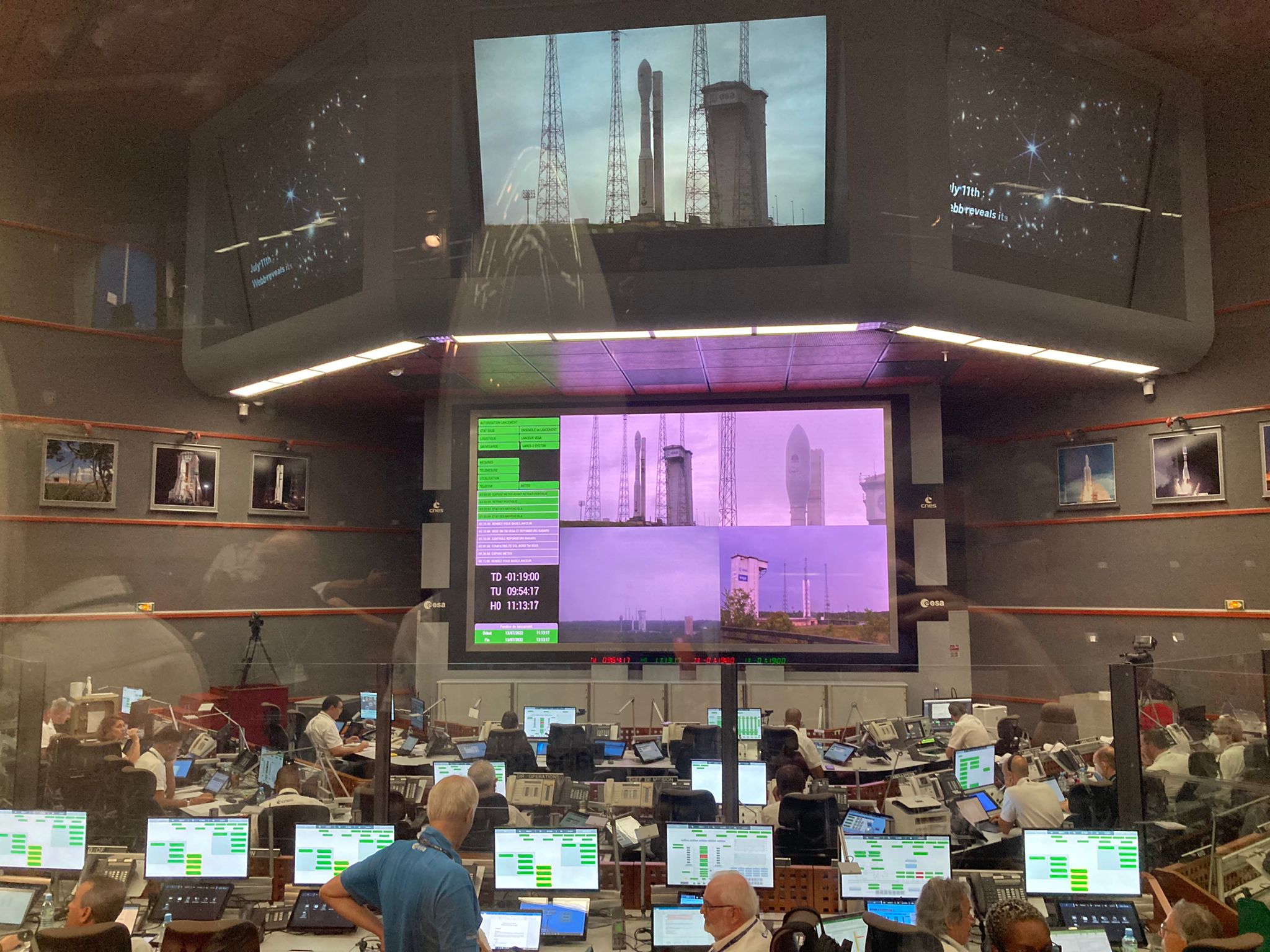 The speaker informs us that the problem seemed to be a voltage spike when they switched the rocket from external to internal power. So, the automatic launch sequence was stopped autonomously by the system. It won’t take long to have a green light again. In the control room, the operators wait for clearance for the launch sequence to reinitiate.

Now the second try. It keeps on raining, once more we go outside ready to see the launch, but shortly after, the launch sequence is stopped once more. There is a feeling of uncertainty in the room as time is slowly ticking down- The problem seems to be the same as earlier: a voltage spike that showed itself now again at another part of the system; supposedly it has something to do with the flight termination system. Now, discussions are taking longer and more intense.

After being scheduled originally for 08h13,and then 09h13, they will now try another launch attempt at 10h13. If this is interrupted, then the launch will move to tomorrow morning. Tomorrow would be, the 14th of July, the French national holiday, but an exception has been made that would allow work to continue at the space center – just in case.

At 10h09, four minutes before the scheduled launch time, everything seems to be good to go. It is nerve-wracking and everyone is really hoping for a go for launch this time.

And there it is, at 10h13: lift-off! Because it is cloudy and rainy, it isn’t possible to watch Vega-C tear up the skies in full effect, but the rocket shows itself in glimpses through the cloud cover.   The sound of the burn is not immediately audible but takes to bridge the 12km between the launch pad and the spectators. The roar of the vehicle is impressive — although it was not as strong as it could have been, apparently, because the launch was oriented to the North-East, angled away from mission control. People remain relatively quiet despite this first success – they know still a lot can happen. At 10h37, another good news: the main payload has been successfully released! It is a scientific experiment called LARES-2, developed for the Italian Space Agency. Finally, the first cheers in the room.

Then, at 12h23, there is a sense of happiness, joy, and relief in the room as the remaining cube-sat payloads are released. A few minutes later the engine of the fourth stage is shut down, at a distance of almost 6000km away from Earth, and the real celebration begins a. It is official: Mission Complete!

This launch and the Vega-C rocket represent a major milestone to step up Europe’s capabilities and competitiveness in access to space. In addition, the first stage of Vega, the P120C booster, will also be used for the upcoming Ariane 6 large-lift rocket, and thus is an important step to go even further.

I felt honored to be part of the first launch of the Vega-C rocket. While Portugal does not directly contribute to the development of the rockets, Portugal has been involved in the space center infrastructure and operations for many years. Since 2019, Portuguese involvement is focused on the future “user” of Vega-C: the Space Rider. Here, Portugal is contributing to the vehicle, the payload, and the landing site segments.