My story with the
James Webb Space Telescope

In a project that has been in preparation for more than three decades, there is no margin for error. Here at home, my children are the ones most tense, worried that the launch, now scheduled for December 24, could affect the route of Santa Claus and his reindeers!

The largest and most complex space telescope ever built, the James Webb Space Telescope, is ready to be launched into space. This international project led by NASA with its partners, ESA and the Canadian Space Agency, has led hundreds of scientists, engineers and technicians to devote much of their careers to completing this engineering masterpiece. Myself, 10 years. I have been working as a scientist at the European Space Agency since 2011, where I am responsible for calibrating one of Webb’s instruments, the spectrograph NIRSpec, the most requested instrument by the scientific community for the first year of observations.

Being part of a mission as challenging as Webb is a humbling experience. The scientists’ ambitious requirements make us work relentlessly to ensure that the telescope will measure up to their needs. During the development phase, I worked for several years in the United States of America where I accompanied the NIRSpec spectrograph, one of ESA’s contributions to the mission, in the telescope test campaigns that took place in some of the iconic places in space history, such as the test chamber used for the Apollo program at NASA’s Johnson Space Center in Houston (Texas), 50 years later adapted to test the Webb. The telescope will operate at 1.5 million kilometres from Earth, and is not repairable. There’s no margin for error, and intensive on-the-ground testing remains our best way to be prepared.

Knowing that Webb will open a new window to the Universe and change what we know today about our origins is a huge source of inspiration. Part of my job over the years has been to support the scientific community in learning how to use Webb’s instruments in the best way possible. When scientists were invited to submit their ideas for what Webb should observe in its first year, we received more than a thousand proposals. The final selection was made by an independent panel of scientists, and comprises 400 ambitious programs involving 2,500 researchers from all over the world, including Portugal!

During the first year of Webb’s observations, practically all areas of astrophysics and planetary astronomy will be investigated, a product of the versatility of the telescope and its instruments. The selected programs will investigate what the early Universe looked like when the first stars and galaxies formed, and reconstruct the evolution of galaxies over the cosmic time. Closer to us, Webb will also be used to penetrate our Galaxy’s clouds of gas and dust to observe the early stages of star formation and their planetary systems, study our Solar System, and unveil the composition of the atmospheres of extrasolar planets in search of the elements necessary for life.

To make advances in all these areas, the design and construction of Webb is based on several pioneering technologies. With a 6.5-meter mirror, Webb has the largest main mirror ever launched into space, making it 100 times more sensitive than its predecessor, the well-known Hubble telescope, also the result of a collaboration between NASA and ESA, and in operation for 31 years. Developed to work in the infrared part of the spectrum, Webb has to be kept at a temperature of -233 degrees Celsius, which means that all on-board systems must be capable of cooling down in space. This is achieved through a foldable sunshield the size of a tennis court that keeps the telescope and its instruments cool. The unique size of this telescope implies that it had to be folded to fit the Ariane 5 rocket, which is also an ESA contribution to the mission.

Webb will be launched from the European Space Center in French Guiana, and within the first few hours after launch, one of the most complex choreographies ever done in space will begin to unfold the telescope until it reaches its final configuration. With 344 single-point-of-failure items, the engineering term given to critical mechanisms that must work for a process to move forward, it is without a doubt one of the most complex space operations ever attempted. 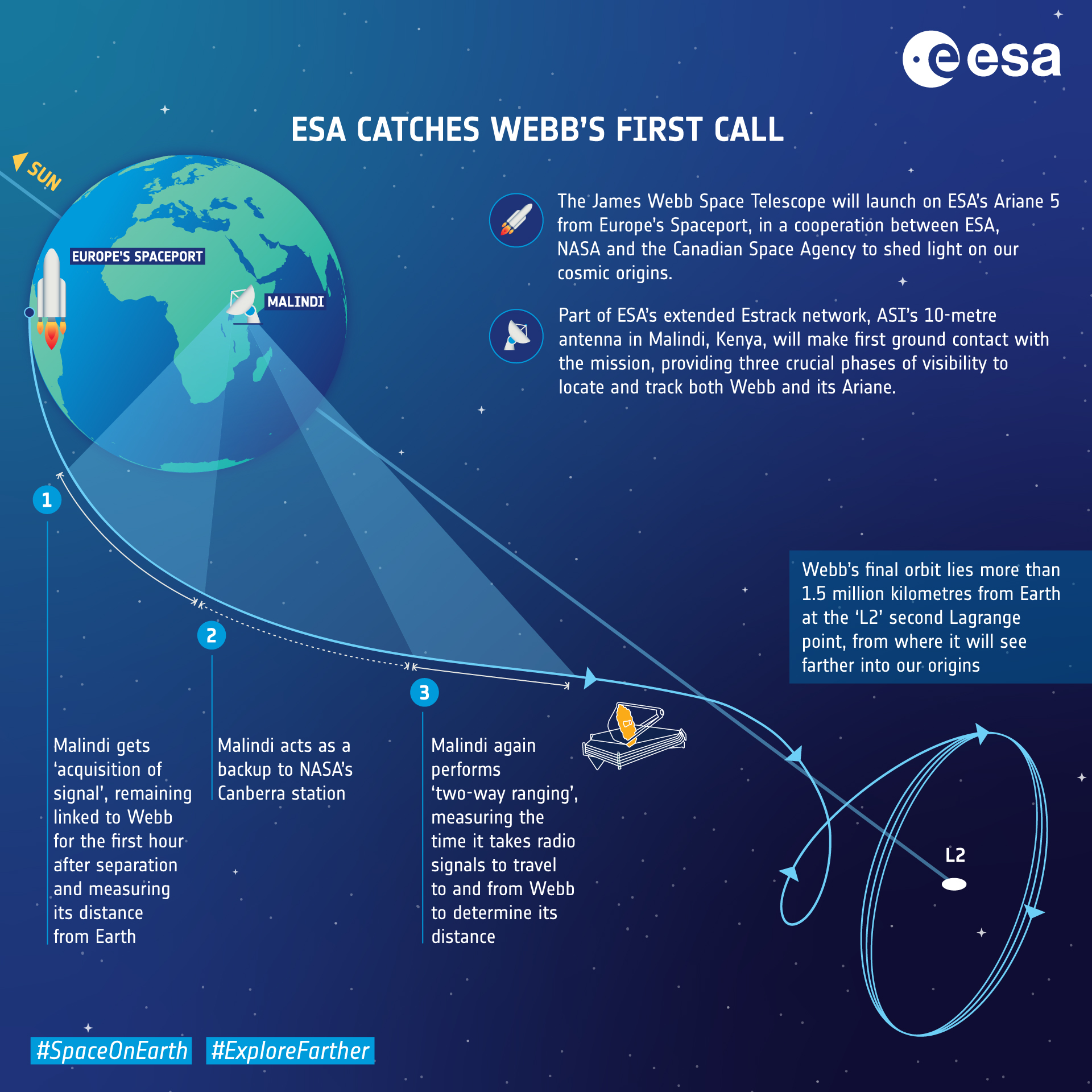 For the first six months after launch, I will participate in the test campaign that gets the telescope ready for science taking place at the Mission Control Center at the Space Telescope Science Institute in Baltimore (Maryland), to monitor the status and performance of the NIRSpec instrument. I will also be involved in the instrument’s calibration activities, analyzing some of the first data that Webb will acquire in space, in order to apply the methods that our team has developed for data processing so that scientific observations can be carried out with the necessary precision, in order to achieve the mission’s ambitious scientific objectives.

Once Webb enters its scientific operational phase, which is expected to start in mid-2022, I will continue my work on other future missions that ESA is already preparing. Currently, I am also responsible for defining and implementing ESA’s scientific operations for the Ariel mission, a mission dedicated to the spectroscopy of extrasolar planets scheduled for launch in 2029, and where Portugal has important contributions at a scientific and industrial level.

I remember the first time I heard about Webb, in the early 2000s, and thinking it was an impossible project. I was still studying Physics / Applied Mathematics (specialization in Astronomy) at the Faculty of Sciences of the University of Porto. One of the reasons that led me to study Astronomy was seeing the director of this program at the time, Professor Teresa Lago, explaining on television the importance of Portugal joining ESA and also the European Southern Observatory in 2000. Not only, as a Portuguese, could I now dream of working at ESA, as there was a university degree to prepare me for it! Today, not only did my professional dream come true, as I have no doubts that Webb and all the teams involved in this phase of the mission are prepared for the big challenge of the coming months. Here at home, my children are the ones most tense, worried that the launch, now scheduled for December 24, could affect the route of Santa Claus and his reindeers!

Have a good trip, Webb!

Catarina Alves de Oliveira (Afife, 1982) is a scientist at the ESA dedicated to the preparation of the future James Webb Space Telescope. She is also responsible for defining, designing and implementing ESA's contributions to the scientific operations of the Ariel and SMILE missions. Currently, she performs her duties at the European Space Astronomy Center (ESAC), located on the outskirts of Madrid. In 2004, she graduated in Physics/Applied Mathematics (Astronomy branch) in the Faculty of Sciences of the University of Porto and obtained a Master's degree for the work developed in partnership at the ISU (Strasbourg, France) and at the Astronomical Observatory of South Africa (Cape Town, South Africa) in 2005.
She developed her PhD project in Astronomy at the ESO (Garching, Germany), completing her doctorate in 2008 at the Ludwig-Maximilians University of Munich (Germany). Later, she received a scholarship from the Marie-Curie Actions program in postdoctoral training at the Astrophysics Laboratory in Grenoble (France), studying Star Formation in our Galaxy.
In 2011 she joined ESA's team of scientists, having also worked in Baltimore (USA) between 2015 and 2020 to ensure ESA's contribution to the development and testing phase of the Webb Telescope operations center.