Portugal with the biggest representation ever at the IAC

Nine Portuguese companies were present with this year’s edition of the International Astronautical Congress (IAC), one of the world’s largest space industry showcases.

The flag of the Portuguese space sector flew high at this year’s edition of the International Astronautical Congress (IAC). Portugal had the largest representation ever at the 73rd edition of one of the world’s largest events dedicated to space. The Portuguese Space Agency led the Portuguese delegation which, this year, was composed by GEOSAT, TEKEVER, LusoSpace, AIR Centre and Omnidea and the unit responsible for promoting the Azores space ecosystem (EMA Espaço). In addition to these, Neuraspace, the Portuguese startup working in the space traffic segment, Deimos and D-Orbit were also present at the exhibition.

“It reflects the expansion and consolidation of the Portuguese space ecosystem,” said Ricardo Conde, president of the Portuguese Space Agency, adding that it is “essential” that Portuguese companies “increasingly bet on the presence in events like the IAC”. This is the meeting point par excellence of the main global players related to Space. The numbers speak for themselves: this year, the congress had more than 9,000 participants from all over the world. All business segments and space themes are discussed at IAC, being a place where networking opportunities, contacts, and institutional and commercial partnerships flourish, besides having space for the dissemination of scientific and academic work.

The paper Fostering a Thriving Space Ecosystem in Portugal looks at the window of opportunity that the changes in the European space landscape can bring to Portugal, whose ecosystem has been evolving consistently for the past 20 years. “Four key elements contribute to this: ambitious initiatives, downstream users, the legal framework, and international collaboration,” summarizes Manuel Willhelm, Space Transportation and Exploration Officer at the Portuguese Space Agency and one of the study’s authors. “It is a very important document about this evolution and that will be a tool in future decision making,” adds Joan Alabart, Industrial Relations and Projects Officer at the Agency, one of the co-authors of the paper.

The other scientific paper presented at the IAC was dedicated to Unconventional Tools for Space Education in the Portuguese Space Ecosystem and focused on the bets of the Portuguese Space Agency to stimulate the curiosity of young people for Space. “In this article we show how the interest in the areas of science, technology, engineering and mathematics evolves in Portugal, which ends up accompanying the development and creation of educational tools not limited to classrooms,” introduces Marta Gonçalves. “Initiatives such as the Zero-G Portugal – Astronaut for a Day contest and EUROC – European Rocketry Challenge are examples of this. With this scientific paper, we want to take a first step towards understanding the long-term impact of these bets the Portuguese Space Agency makes on both participants and the Portuguese space ecosystem,” he adds.

In this sense, and reinforcing its focus on education, the Portuguese Space Agency brought together a set of international actors to discuss space education and outreach at the IAC. With the panel “Future of Space Outreach – International Rocketry Competition”, the aim was to stimulate discussion and interest around space education, one of the strategic pillars of Portugal Space 2030, the Portuguese strategy for space. Therefore, the debate focused on rocketry competitions, involving other organizations such as the Australian and South African space agencies, the Spaceport America Cup organization, and the Portuguese Space Agency itself. 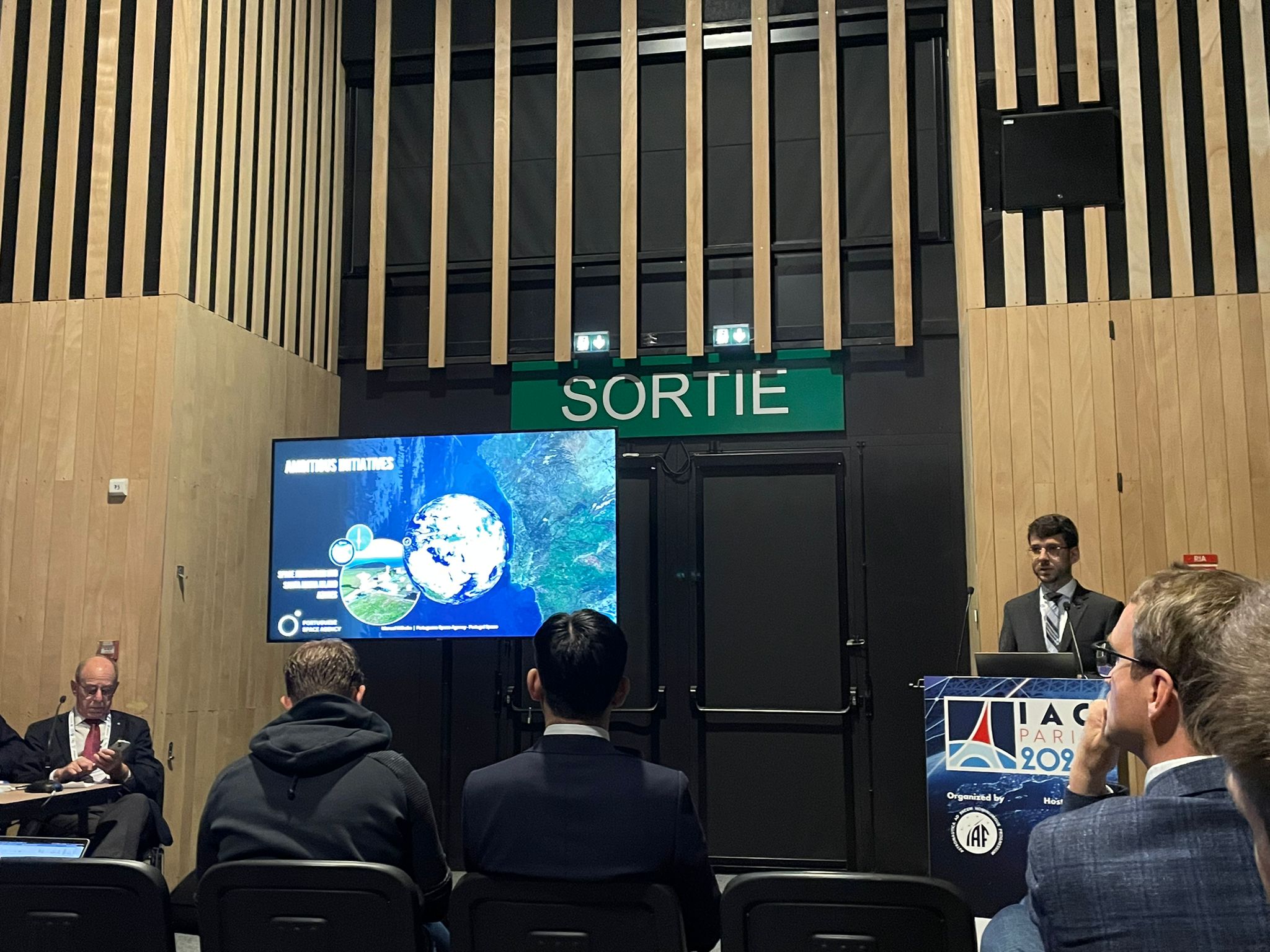 Two papers produced by members of the Portuguese Space Agency were presented at the IAC. © DR

Portugal and Ukraine strengthen relations in the space sector

The IAC was also the stage for important meetings and moments of international interaction. Over five days, the Portuguese Space Agency’s stand at the congress hosted more than 20 meetings, which revealed business and cooperation opportunities. This was the case with the meeting between the Portuguese and Australian delegations, the latter represented by the Australian Trade and Investment Commission (AUSTRADE), Aimuth Advisory, Capricorn Space, DUG, Neumann Space, Nova Systems Australia and New Zealand, RAYTRACER and Saaber Austronautics.

Another highlight of the Portuguese participation in the IAC was the signing of a Memorandum of Understanding (MoU) between the space agencies of Portugal and Ukraine, represented by President Volodymyr Taftay. According to Ricardo Conde, president of the Portuguese Space Agency, the MoU now signed represents a way to strengthen “cooperation between the space sectors of the two countries, bringing companies closer together” and to “launch initiatives for technical and scientific cooperation in various areas of this sector. “

“Ukraine is a major European player, particularly in the development of components and propulsion systems for launchers, and this is an area that Europe will need to strengthen in the coming years. There has been cooperation between Ukraine and Europe over the past few years and today this cooperation must be amplified to continue to support and develop its industry, which is increasingly integrated into the European space,” Ricardo Conde pointed out.

“The European Space Program was dependent on Russia. There was good cooperation between countries and the partnerships were well-intentioned, but the current circumstances imposed a cut in those relations and forced us to understand how we can do this within the European community,” he also maintained.

The memorandum signed with the Ukrainian Space Agency aims to develop cooperation activities in the areas of basic space science, Earth observation, space situation monitoring and analysis, space transportation systems, education, and support for cooperation between private entities in the two countries, among many other aspects.